Our vision is to substantially reduce the loss of lives at sea by creating Better Solutions for Safety at Sea.

We do so through our commitment to quality, constant innovation, and sensitivity to our customers' needs. We are sensitive and alert to market demands and possibilities and continuously improve our products and services.

Our products have been saving lives all over the world for more than 30 years. We know that people's lives depend on the work that we do and the reliability and performance of our products.

Therefore, all of our team members take profound pride in maintaining absolute top-quality production and delivering products that we know will perform when needed and live up to - or exceed - international safety standards.

Not only world-class safety products

Our mission is to produce world-class safety products and provide the best possible service to our customers. We continuously develop state-of-the-art products that correspond to our customers' demands. In collaboration with our customers, we design new products by unconventional and innovative thinking - products that increase safety at sea due to ingenuity and top-quality production.

We fulfill our mission through the knowledge, commitment, and engagement of our staff. We are committed to developing our employees' knowledge, skills, and creativity to continue to create Better Solutions for Safety at Sea and reduce the loss of lives at sea.

In a very competitive global environment and in the very demanding profession of marine safety requirements, our mission must consist in proposing the best-designed rescue equipment manufactured with awareness for the protection of the environment.

Our mission is therefore to provide Better Solutions for Safety at Sea. We aim to achieve that and maintain the highest standards of Quality, Health, Safety and Environment (QHSE) procedures, conducting our business with honesty and integrity in a responsible manner involving our employees.

We work to constantly improve areas related to QHSE. We undertake to take appropriate measures that are ethical and in accordance with applicable legal requirements, requirements from stakeholders and international and local standards in our industry.

We commit to taking appropriate actions that are ethical and in compliance with applicable legal requirements as well as international and local standards within our industry.

Quality It is an essential part of our strategy to have C.M. HAMMAR’s name continually associated with high standards of product quality and service. We have a thorough QHSE risk assessment process in place, and continuously collect data to analyse, evaluate and improve our performance committed to meet the requirements of ISO 9001.

A healthy work environment is one that is safe, empowering, and satisfying. C.M. HAMMAR strives to integrate sound health and management practices into all aspects of business and reduce work-related accidents. C.M. HAMMAR must comply with all safety and health laws, regulations and practices.

We recognize that our activities affect the development of society and the environment around us. C.M. HAMMAR plays an active role in improving environmental conditions, wherever there is a natural link to our business. We care for the environment by complying with environmental legislation and ensuring that reducing the environmental impact is considered when developing new products and optimizing production and service processes to reduce waste and resources used.

WE MAKE SAFETY PRODUCTS FOR SHIPS & THE MARITME INDUSTRY

Hammar leads the way towards increased safety on the seas by actively developing safety products. We develop, manufacture and supply release units for liferafts and EPIRBs, RRS, and various Lifejacket Inflators.

Our products for safety installations are designed to be safe and reliable in all extreme conditions.

The Hammar H20 is the world's best-selling HRU and has saved lives on the oceans for more than 30 years. The H20 combined in remote release systems enable you to release liferafts, EPIRBs, or marine evacuation systems from the bridge or other strategic locations onboard a vessel.

WE STAY AHEAD WITH EXTENSIVE TESTING

Hammar performs extensive testing on all of our products. We are often ahead of regulations and test more rigorously than required by governing bodies.

All the incoming components are thoroughly measured and tested by the quality control team. Crucial components for product performance are inspected rigorously in several different stages of production.

Most of the components that make up the H20 are mounted automatically by purpose-designed machinery, always operated and monitored by the well-trained Hammar crew. Several quality controls are programmed into the machinery. Visual controls are also made during the production process.

Four percent of our products undergo destructive tests where a real-life activation is simulated.

To maintain total control and achieve the highest reliability standards, all of our products are produced in our own factory located in Sweden. The production is highly automated to ensure a high and consistent level of quality.

After the components have passed the quality-control, they continue their way through the production line.

Even in this highly automated and digitalized production, there is still no way to make the over 200-year-old fisherman's knot on the H20 more effectively and safely than by hand - an example of how old professional knowledge and innovation are important to create high-quality solutions for safety at sea.

Every single step in our production process is developed with a focus on quality and quality control. Of course, we work hard to streamline our production, but quality will always be our top priority. Our products are designed to save lives - and we have no margins for errors.

Our goal is to create positive change for future generations. Our overall environmental goal is to contribute to reduced environmental impact in line with the Paris Agreement. As an interim target, we shall reduce CO2 emissions related to our operations by 50% by 2030.

We must contribute to the reduction of greenhouse gases. Our target is an annual reduction of at least 7%, which is neceessary if we are to achieve a 50% reduction by 2030. (This includes direct and indirect  energy consumption, including the full lifecycle effect of our products.) 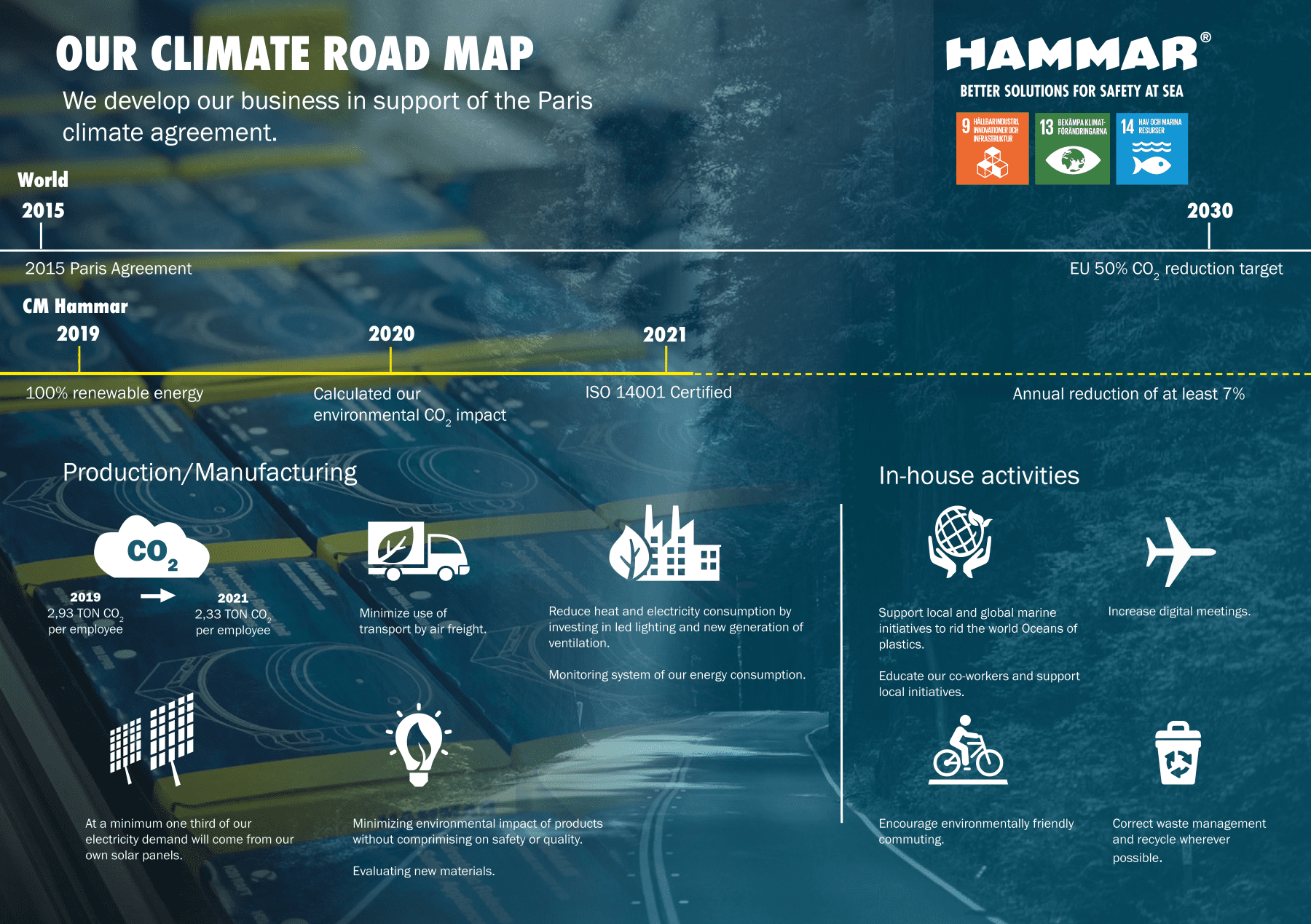 OUR COMMITTED AND ENGAGED STAFF

We believe that we are stronger together. Our mission can only be fulfilled through the knowledge, commitment, and engagement of our staff.

We are committed to developing our employees' knowledge, skills, and creativity to continue to create Better Solutions for Safety at Sea and reduce the loss of lives at sea.

Quality is one of our core values. We ensure a high quality through careful testing of our products so that you can feel safe at sea.

We want it to be easy doing business with us. We thrive on being available to our customers and leading the way towards Better Solutions for Safety at Sea.

We advertise all our vacancies via our social media. Keep updated by visiting us on Instagram and Facebook.

We at Hammar think it is extremely important that we all help in the way we can! That’s why we are participating in the “Save Lives at Work” initiative through the GeBlod organisation. The initiative is about allowing and encouraging our employees to donate blood during working hours.

In Swedish healthcare, on average, one bag of blood is needed every minute, around the clock, all year round. The blood is used, among other things, in cancer treatments, childbirth and accidents. Since a bag of blood can only be stored for six weeks, a steady stream of blood donors is essential.

Being a blood donor is a vital social investment that saves lives. Together we can make a difference!

If you want to know more and participate in the “Save lives at work” initiative, you can read more here: Rädda liv på arbetstid I GeBlod

Ensuring our employees work in a safe, fair, and transparent environment is important to us at Hammar. We encourage anyone (employees, customers, suppliers or other stakeholders) to speak up if they suspect wrongful activity or misconduct at any of the Ernströmgruppen companies. We also want you to feel comfortable to make a report and know it will be taken seriously.

If anyone should suspect wrongful activity or misconduct this can be reported though this link: https://ernstromgruppen.whistlelink.com/

WE HAVE MORE THAN 160 YEARS OF HISTORY

It all started on the 9th of May 1856. The traveling blacksmith Carl Mauritz Hammar had arrived in the city of Göteborg on the western coast of Sweden. In the heart of Scandinavia, here was - and still is - the biggest harbor in northern Europe.

Here he saw the potential to be a supplier for the city's big shipyard industry. And on that magical day, Carl Mauritz received the king's letter permitting him to start a sheet metal workshop, and the company CM Hammar was founded.

THE HISTORY OF HAMMAR 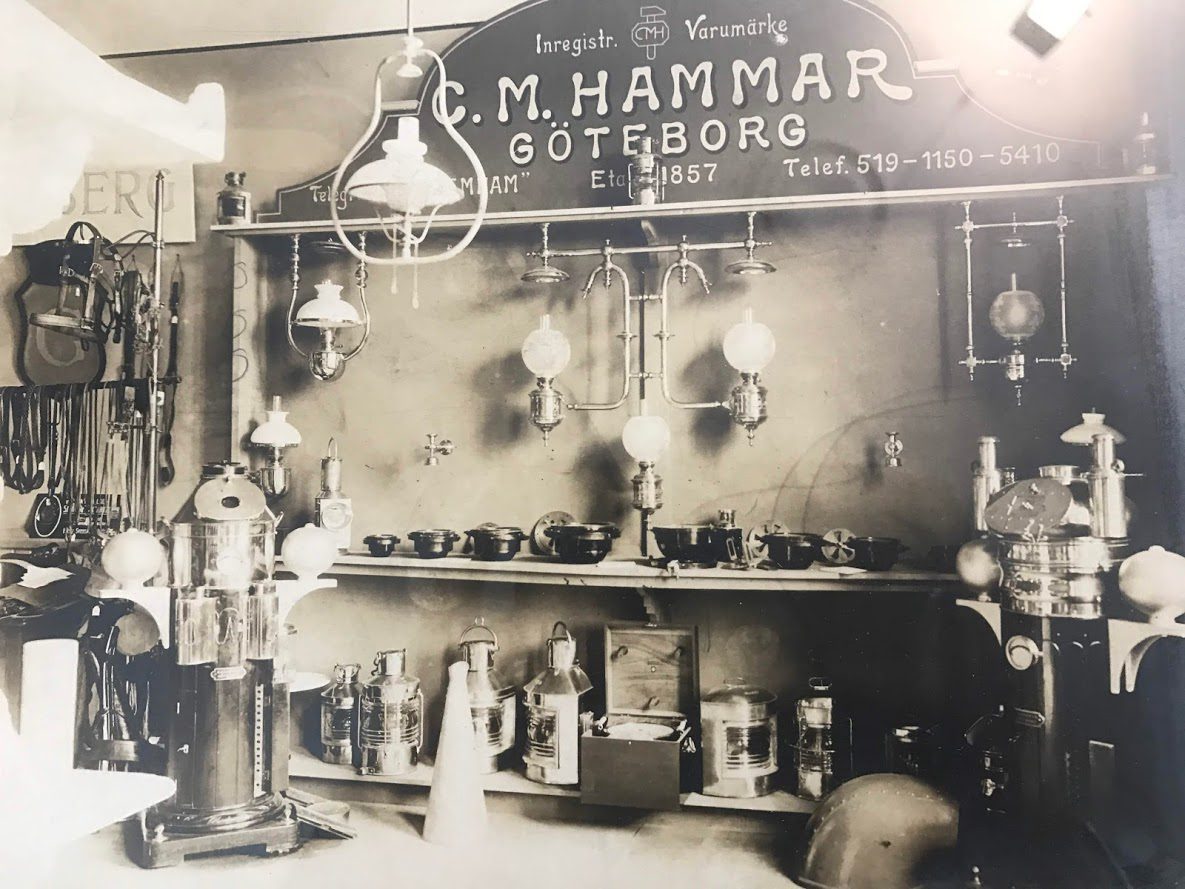 The company soon got recognized as one of the best metal shops in the country. The specialty product segment became navigation lights for ships, which gave the company a prestigious gold medal in the 1886's world exhibition in Liverpool. Thanks to one of the house's sons, Hammar became the first Swedish company to sell compasses in 1895. The son Gustaf was studying in London and learned all about manufacturing compasses from the Hughes family. Until 1978, the company had delivered more than 7000 Hammar compasses. 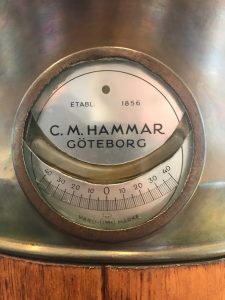 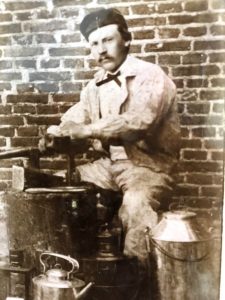 The start of Better Solutions for Safety at Sea

The close relations between the Hughes families and Hammar led to long-term business. At the beginning of the 20th century, Hammar started to focus on Better Solutions for Safety at Sea. Acting as a general agent, Hammar started to import nautical instruments.

Together with the Hughes family, they developed the compasses with vibration dampening and gyros. In 1930, Hammar delivered the first eco sounder to a Swedish merchant vessel and, in 1946, the first radar. In 1956, Hammar introduced the inflatable liferaft in Sweden, a significant step toward increasing safety at sea. 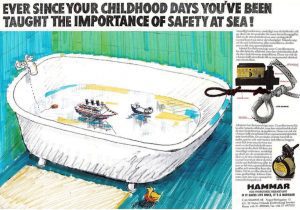 Since 1985, the Hammar H20 HRU for liferafts and EPIRBs has been the leading product in the Hammar product range. Today, the Lifejacket Inflators and the RRS for life-saving appliances are important products in Hammar's assortment.

In January 2014, Hammar was acquired by Ernströmgruppen, a privately-owned conglomerate with a long-term ownership commitment. This gave Hammar the possibility to combine the best of entrepreneurial spirit and large-scale enterprise. But the core values at Hammar will remain the same. We will continue to focus on our commitment to quality, constant innovation, and sensitivity to our customers' needs.

We have done it for over 160 years. But for us, that is just the beginning.

Milestones in our history

2019 COR - The Electronic Control Unit for lifejackets is introduced